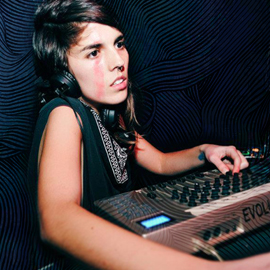 Hi Irene, where does your love for (electronic) music comes from, did you have any key moments or strong influences?
My love for electronic music comes both from the raves and the electronic club scene. I went to my first rave when I was 17 and discovered jungle for the first time, at the same time I was getting into electro scene in a club called Coppelia101 and many others. After mixing a lot of electro stuff with drum’n’bass I started playing minimal since I was really impressed by the experimental, geometric and textured sounds of first releases from minimal and techno labels like Mobilee, Kompakt, Sender etc. I realised that all of my vinyls came mainly from Germany at that time, so my first trip to Berlin with 21 years old with my friends was a keypoint. I freaked out with 24h on-going parties, dark rooms, sound systems, music… and entrance policy at clubs like Berghain, where the door girl told me: “You were here yesterday, you’ve got a drug problem!” I replied: “I got a music problem”, true, I spent 250 Euros in vinyls at Hard Wax, where I was two days and couldn’t say nothing but “coool” all the time.
I became really interested in origin, aesthetics and history of underground electronic music. I have never focused on artists when looking for music, one rule I have is to listen by release date, so I just follow genres, labels, and soundcloud stream, anyway, sometimes names repeat in my sets, that is the case with Shackleton, T++, L-OW, Orphan101, Rob Hood, Ramadanman…

Besides DJ’ing you’re also a Graffiti writer, MC and… is there anything we forgot? How do you manage to find the time (and muse) for all those activities?
I´m also an art teacher for teenagers! Well, I’m just an hyperactive day-dream activist, I never stop dreaming and my happiness is to make those dreams come true. Time is a matter, but I have released myself from work and material needs and I try to spend the less time in things that I don’t like or that aren’t necessary or that I don’t feel like doing. We are devising our own commune here in Madrid, and I hope one day we can achieve it, in some way it already works.

You DJ and play live – do you prefer one of it? And what is your approach to a DJ and/or live set – education or entertainment for the crowd?
Actually I play just own loops and voice live, but I always mix it with others´ sounds and tracks, I don’t have enough sounds to perform a whole set. I prefer DJ’ing, because I do not like to perform (in the meaning of play manually an instrument), so DJ’ing let me focus in listening more than performing (I am a John Cage admirer). Entertainment forever and ever! If you don’t enjoy what you’re doing then you don’t like it in fact, education means to me to share an experience where you and somebody else exchange information that becomes true for each, in that way you can not avoid educating while sharing music, entertainment is a form of education – and you have to educate your relatives in party and leisure too! 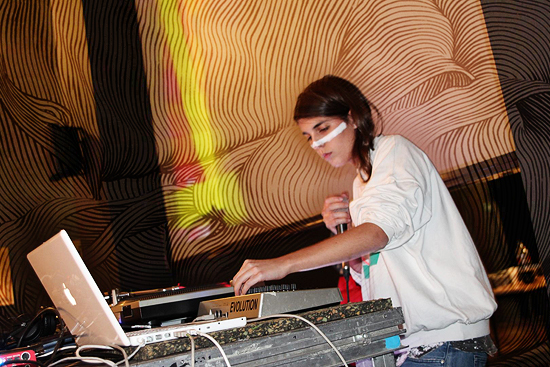 When did you start to produce your own music and what got you into music production? What does your studio setup look like?
I started making my own music when I decided no other’s instrumentals fit perfect to my rap lyrics. I started rapping over techno vinyls at 33rpm cause none of the instrumentals I found at that time convinced me. Then I realised I don’t like the same things for rapping as for playing as a DJ, but I was so crazy I started mixing together all of the sounds I recorded with my portable recorder. That has always freaked me out, the perception of ambient sounds and the possibilities of them into music, rather than instruments.
My studio setup looks like a lot of boxes around my room (I have moved 4 times in the last year), it’s a shame! But it has never looked like a professional one, I have lots of folk instruments, a sound recorder, a condenser microphone and a computer with a sequencing software on it.

Your crew Abismal seems to take a break, will there be a comeback? What was/is Abismal, what’s about the name and how did you find to each other?
Yes, there is going to be a comeback, but I don’t know the details exactly. Abismal is a self-managed collective project from Madrid for experimental electronic music and space modifying (new tribalism I say). We make events and parties at spaces that we find interesting and related to our politics – squats, social centres etc. – and modify the space structure so people go inside a disturbing atmosphere with the visuals and sounds of different artists. There are around 50 people that have organized some of the parties, me and a friend, Alex Zeta, started everything, and we made contact with lot of people, people from Madrid, Spain and other places. We discovered a lot of people really freak and really into music and underground, some only want to contribute to the project with their work or support, some perform, but everybody has been a beautiful discovery (I hope we can stay in touch through time).
Abismal is a real-utopia project, because we try to create the party we would love to have but we accept no conditions but the things we want, so price is free (means you choose the price), location and line-up are usually secret and artists are exactly the same regardless of their age or renown. The last thing we have tried to make, has been a sound system construction workshop, something similar to the Another sound is possible project from Leipzig but smaller, but it didn’t work out. I hope we can make it in the future. 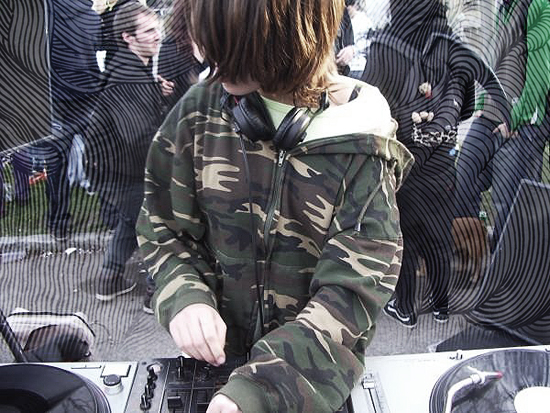 Do you live live in Madrid these days? How is electronic music scene of the city? Or in Spain in general? Do you find many official partys to enjoy? Or is it more about the illegal stuff, open airs, off-locations? And how does the economic crisis in Spain affects the music and party scene?
Yes, I live here and it’s crazy but love it. The electronic music scene is, in my opinion, quite reduced, but there’s always something in the underground because that people never stop. Now there is a melting pot growing because you can find parties from the most commercial sponsored one, to the ongoing club promoters, which are sometimes boring, to lots of illegal parties, warehouses, and still, some raves. I prefer to self-organise because in my opinion institutions and companies lead us to gentrification and similar harms.
Legislation and state are all the time in this mess, now there is a big persecution to parties by police, suposedly because of an accident which took place last year, but it can be an excuse only to try to regulate and stablish taxes and limits for enjoyment. What is common to all of that, is that people want to party, Madrid is a lot about street fashion, and one thing I love is that you can party either with “prolls”, moderns, fags, activists, hipsters… but everybody wants to celebrate life and social structure is really organic. A lot of people has emigrate because of economic or work reasons, but the ones who are still here, we are trying to find our way and create our own life, inside, trough and outside the system, and enjoy it.

What was your approach to your Ashorecast? Where and how did you record it?
Well, my approach to it was to create a mix of smoke, dust, and jungle, which are the things that I like to make feel in a dancefloor now. I’ve been preparing this set since one year ago, but I couldn’t record it, so I collected some of the loops, ambients and tracks. I played it in Ladyfest, which took place at Checoslovaquia34, a self-managed venue and many others. It was the first party I was invited in the last year, so I recorded the set there. It wasn’t supposed to be that short, but police came and we had to stop in the “highlight” of my set… no worries, party continued much lower, but Ladyfest will happen more times. And me and lot of the people moved to the dike-trans-fag dark room upstairs in the meantime. So just remember: You gotta fight for your right to party – we do!

What’s coming next for you? Any gigs, releases, parties?
There are things to come next, but I’m not sure when. What I’m preparing are some rap releases with others’ tracks, and I’m working out Abismal…