Bart, what was the last record you bagged and why?
The last record I bagged was yesterday at Rush Hour, with a slight hangover after my gig in Chicago Social Club in Amsterdam. It was a mint second hand copy of Frankie Knuckles, Satoshi Tomie & Robert Owens ‘Tears’ on Ffrr. An eternal classic and one of those perfect end-of-the-night records. It’s actually very sad but also leaves me with a big smile after playing it because it’s house music perfection in all possible ways.

So you’re still on the hunt for house gems from the 80ies/90ies. You’re a DJ now for more than 20 years – aren’t you bored of house music?
It’s exactly by constantly looking for stuff that I don’t know or have yet that I don’t get bored of house (or any other) music. It’s like our universe is ever expanding forward, so we can explore it backwards forever as well, that’s exactly what happens with my record collection. And avoiding becoming bored with house music also happens naturally because I buy and play way more than just house of some form or kind. Most DJ’s do like a big variety in music, but only a few of them also actually play the disco, pop, soul or hiphop that they like. That’s something I can’t really understand. I play simply everything that I like and buy, and for that reason I try and have a very varied DJ schedule. Playing anything from peaktime 2 hour house slots to all night bar sets. For me that’s the best way to keep things interesting, and I love the contrast of playing some soul standard at one point and a rave classic one hour later. My bi-weekly residency in Ghent’s Charlatan is my perfect playground for that. It’s a place where you can hear blatantly commercial r&b and EDM in one room, and obscure Belgian new wave in the other room. People come for the party and not for this or that DJ, and it’s always a challenge to get them to party to stuff they don’t really know. Not always easy, and sometimes big hits are required to get them going, but when you then have them screaming to an unknown house or techno track, for me that’s the ultimate in DJ’ing, because it is simply the power of the track in combination with how you brought the people to the point of just dancing because they like it, and not because it’s a big hit by hyped producer such and such. 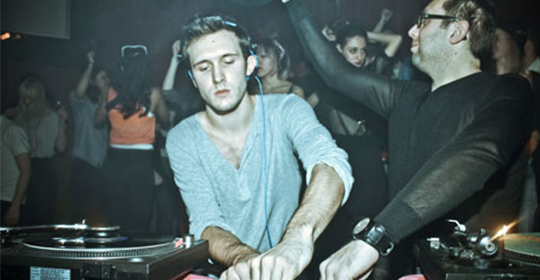 So making people go crazy to unknown and obscure music seems to be an essential DJ ability for you. What else makes a DJ a good DJ for you?
In the most simple of definitions a good DJ is one that makes the people dance in front of them. A great DJ is one that can do that to music the people don’t really know or were not expecting. I could go all intellectual about sharing soundwaves, building a story or feeding of the vibes radiating from the dancers, but as you can guess that’s not really my thing. One thing that I do absolutely stick with is that in order for a DJ to be a good DJ he or she should get to play the whole night alone. It’s only when you can dictate the playlist for the whole night that you can truly get the maximum out of your knowledge, your records and the people on your dancefloor. Two hour slots are silly and a disaster for overall quality of a night. From that you can’t even blame younger DJ’s for not respecting the art of warming-up, they simply don’t get the chance. That’s why I actually think all DJ’s should play bar gigs and weddings in the beginning of their career. It can teach you all you need to know about your craft.

In Great Britain you have parties with DJ slots around 45 minutes to 1 hour. Do you accept gigs like that?
With any booking request I have I always want to play an absolute minimum of 2 hours, and if the night allows it 3 or 4 is way better. My schedule being quite busy locally and with Belgium being such a small country with liberal opening hours it sometimes happens I do two or three two-hour sets in one night, but allnighters are always the most rewarding musically. I can understand why clubs and promoters book multiple DJ’s, and I love to play in all these different places every weekend, but I wouldn’t really mind to go back to the days of yore when you had a weekly allnight residency in a club. If one day a really good club would offer me the chance to build a night from scratch for years on end I wouldn’t hesitate one second to say yes. Like Harri and Dominic at Sub Club in Glasgow have been doing for the odd 20 years or so. Play every single Saturday night, every now and then invite a guest, build your own crowd and your own hits, that’s DJ heaven right there for me. In Belgium it depends a bit, where kind of in between Germany and the UK (also literally :-p) and I easily get two hours as guest, sometimes more, but not always. If we get as FCL at least a three hour slot we like to play back to back, but even then we often play alone one hour and then do the last part back to back. If we get 6 hours we might play 2 hours alone and 2 hours together, or 6 hours together. It’s never really defined and depends on the moment. If people book FCL for two hour or – God forbid – less, then it’s mostly just one of us playing as FCL. We don’t see the point in travelling for a day to play 7 records each… Playing alone or with two DJ’s is an entirely different thing, but as long as the music is good both can work perfectly for me.

You are one of the first house protagonists in Belgium. Do you see age as a problem? Do you want to stay with electronic music and DJing?
I’ve been indeed active since the very early 90ies, but the first 7 or 8 years of my DJ’ing was limited to monthly local parties and the odd one-off night in the area. I only started DJ’ing more early in the noughties, and it’s only been the last 7 or 8 years that I’m racking up 100+ gigs annually. That being said, up to this point I never tire of DJ’ing. Sure, there are some nights where the magic is not happening and then it can be difficult to thoroughly enjoy it, but in the end I always realize that people are actually paying me to play music, so there is absolutely no other thing that can be more fun than that. So as long as I have that feeling and as long as there are good records to be played and as long as people ask me to come and play…I’ll be there behind the decks. Planning your future is a bit of a waste of time for me. I feel that when you handle your things well in the now then your future is shaped by that and there’s no real need to worry too much. If my DJ’ing stops or slows down I’ll probably just work in some other part of the music world, or I’ll just work in a restaurant and cook food. Plenty of fun things to do in life! So age is no problem at all as long as you are in fine shape health-wise.

Last question: Let us sneak into the future of We Play House – what’s coming up?
With WPH there are always exciting things happening, and it’s no different at the moment. The (for now) last episode of ‘Our Beat Is Still New’ should be out around now, with tracks by FCL, Lauer, Locked Groove and Innershades, vinyl-only this one! We also have the new FCL single coming up in our V.I.P. Series. Gonna be one-sided again, less limited than ‘It’s You’, but equally to be grabbed quickly The fabulous Lady Linn is on vocals again, and the reactions since I started playing it are quite stunning, so curious to see how this one is gonna grow and be received. There’s gonna be a Deetron remix of it as well around June, so very much looking forward to that as well. Before the summer we’ve also got a new Russ Gabriel coming with a Kiani & Red D remix, and there’s a new Luv Jam on the way with a Jacob Korn remix. Like I said, plenty of stuff to get excited about!